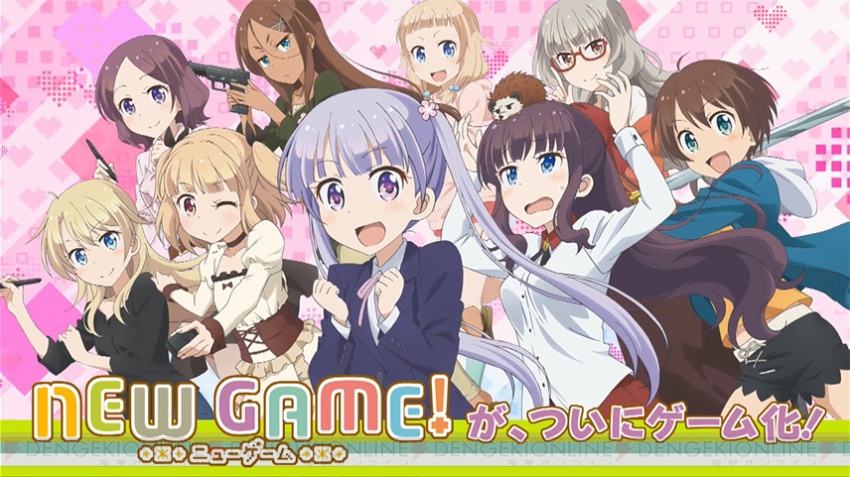 “It is really relatable as a first working experience”

This is what a friend of mine told me about “New Game!”. Unfortunately, I wasn’t *that* lucky, but I can see what she means, and totally agree with her: “New Game!” is a splendid, fun anime, which still feels “real” in its scenes. For the ones that like the game design world, and are into slice-of-life genre, this is absolutely a must-have-watched. Let’s see why together!

Everything in “New Game!” just works fine: let’s start with the art style. It is modern, fresh and sparkly, making each character shine. Character design actually doesn’t differ so much from character to character, but this doesn’t compromise the overall feeling. Each situation the character find may have happened in a normal office: from being late at work, to the feelings and thoughts over the first paycheck, to the problems around deadlines (we’ll talk a bit more about this later) there is no exaggeration, and still, everything is sweetly covered by a veil of soft fun. The problem that the characters faced or have faced in the past are usually common workplace problems, which are explored with the same soft and sweet touch. The soundrack is smooth, the opening and ending enjoyable. They all help making the overall bright feeling.

The anime gives some light insight in the game design workflow too. All the characters, apart from Hajime and Umiko, are in the art team. Hajime is in the animation team (while sharing the same office space with Aoba, Yun and Hifumi), while Umiko is the lead of the development team. Nene, Aoba’s friend, is a stagist in the debug team, but is still led (and loved) by Umiko. We can see some of the design challenges, as defining the character art from scratch, starting from the written profile and background, and how hard it is to go through many iteration to guarantee quality characters. We also get to know the difficulties that revolve around the interactions between the design and the development team. Sophia makes some errors in her character building process, which create problems for the developers when integrating her NPCs in the game world. The anime is, still, not focused on problems: it touches every matter without making it a long, hard situation to deal with. This is fine here, as it aligns with the overall style.

A gaming company where all the employees are girls: this is Eagle Jump, the anime environment. How can I be objective on something like that? Jokes aside, each (female) character is well characterized, and feels quite real. Aoba, the protagonist, loosely reminds me of some real manager, for her attitude to prioritize work over other things. She also reminds myself, when I was really proud of my job. There is nothing “ideal” in her, which makes her a really good protagonist. There are some strong relationships going on between couple of characters, which somewhat makes it feel like a sentimental (yuri) relation. This is intended, although never exasperated.

Crunching: Can You Soften This?

Aoba (her manager, and everyone in Eagle Jump, it seems) are very dedicated to their work. They even stay the night working – which is not new to me at all – to reach their final aim. I don’t know how to feel about this: they actually do something they love, and get rewarded for everything they do. PTO is mentioned many times throughout the anime, and this makes the feel a bit less uncomfortable. As reviewed by Crunchyroll, overtime work is fairly common. The anime depicts it softly and brightly everything else. When Aoba’s best friend, Nene, tells her that she’s overworking and should take care of herself, they argue and manage to make up only when Nene recognizes that Aoba “is doing something that she loves”, and she’s “doing her best to prove herself”. Aoba doesn’t say that she also recognized that overworking is bad, though, even if she says that she would care a bit more about her health. This mindset is quite dangerous, and there is no exploration of the matter in its “darker” side. As this bright-toned story tells, it actually would be acceptable… if just there wasn’t anything behind it. This also doesn’t mean that the anime loses appeal: it is a slice-of-life comedy by design, and this is what makes it enjoyable and coherent.

“New Game!” is a fine anime: it brings together a series of working situations making them fun to watch, without entirely sacrificing realism. It is smooth, has nice art and soundtrack, has nice characters, and also give the viewer some insight in the game design and development environment. Oh, and, right, one last note: the use of color is fantastic and somewhat original: it comes close to “No Game No Life”, but without over-saturating. It makes many scenes shine brightly, leaving a nice impression, that lasts.

This is a text widget. The Text Widget allows you to add text or HTML to your sidebar. You can use a text widget to display text, links, images, HTML, or a combination of these. Edit them in the Widget section of the Customizer.